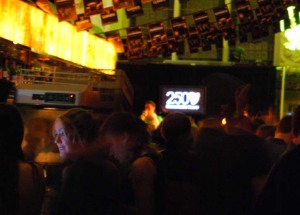 Sometimes people surprise ye! Just when you think its not going to happen they pull it out of the bag!

I’m sitting at home at 2100 on Thursday night when I get a message.. ‘Are you coming in?’ 20 minutes later I was in what was consider one of  the ‘Locals’ for Arthur’s Day waiting for Kasabian to play!

The place was buzzing..The Guinness products were well on the way to being able to fill a swimming pool!

Only drawback is the gas emissions were at a record high and if captured could have kept our island in energy for at least a year! (I believe that the nearest peak to Thursday seems to be mid March each year)

Kasabian were great! Wasn’t really sure what to expect! But I would love to have the guys round to mine to be the party band for the night! They were well up for it and as well as playing all their hits did a cover of Gwen Stefani’s The Great Escape and of Runaway which I think was originally done by Del Shannon.

Good night, Marketing wise Arthur’s Day has turned out to be one of the biggest successes I can think of. Pick a day and turn it into a contemporary manmade holiday – Will we have Arthur’s Day every year now?

As for the tickets to get to the event: Fair play Terry, you’re a gent!

I've three great guests on #TheLondonEar for you t

Morning all! #TheLondonEar kicks off at 12 midday