This Is it – Movie Review 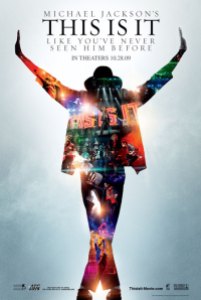 This was what fans had longed to see. Unfortunately it took his death to show the world what Michael Jackson was really like.

Directed by Kenny Ortega, ‘This Is It’, goes behind the scenes at MJ’s rehearsals for the never to be 50 concerts in the O2 in London.

From the outset we see Michael, the performer, the perfectionist and sometimes the teenage-like Michael. The editing in the movie is superb, noticeably so in ‘Wanna be Starting Something’.

Jackson’s love for his music and his knowledge of music is clearly seen. His perfectionist views on his own music, it’s obvious which of his songs he prefers performing which in an almost childlike fake cough way, when during a Jackson 5 song, he is told that they (show director) cant hear his voice he insists that he must ‘save his voice’.

The admiration his dancers and musicians had for him can be clearly seen, the dance moves and newly filmed video segments (Thriller looks amazing – I would love to see the 3D version) only give us a glimpse of what could have been.

For all the Godlike comments that MJ has been given, the one thing that struck me throughout this film was his fraility. His slight build and almost insular movements show that away from the big press conference announcing the 50 concerts, here was a man so fragile.

The soundtrack only serves to remind us of what a talent he was.

Thanks for dropping by!

Sometimes it's nice to get colour matches in a pho

Sundown at the fairground. I have to admit, this

Today on #TheLondonEar, I'm proud and delighted to

Before the storm. The gulls come in from the sea a