Me and Orson Welles Review 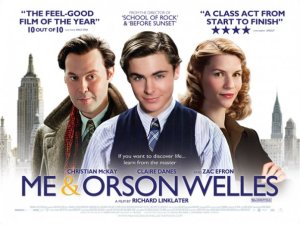 I’d better write this up.. I dropped in to the lunchtime Openline show on DCUFM to do a review of this yesterday.

The IFI in Dublin was the venue for a preview and Q&A session with Christian McKay, star of Me and Orson Welles.

Based on the book by Ropert Kaplow, the story takes place in 1937 in the week leading to the legendary opening of Julius Caesar in the Mercury Theatre off Broadway.  Newcomer McKay, plays the role of Welles,  while High School Musical hero, Zac Efron plays Richard Samuels, a youngster in search of a big break.

McKay is a wonder as the colourful Welles and the resemblence is uncanny. He brings Welles’ mood swings and gigantic personality to life.  Efron, who is a surprising good actor, still gets his chance to sing a little with a little ukulele number.

Filmed in the Isle of Man, the film boasts an impressive supporting cast including Claire Danes (Romeo & Juliet) and Ben Chaplin (The Truth about Cats and Dogs) and Director Richard Linklater turned this into an interesting story and worthwhile viewing.

During the Q&A, McKay lets his humour show, even though he says its nerves. He tells how Linklater had the opportunity to film in Hollywood but turned it down as it would mean having a different leading man. Linklater showed some courage in choosing and sticking with an unknown, (It paid off too).

He also told of how the filming took place in the Isle of Man and of some of the madness that surrounded the cast as the heartthrob Efron attracted mobs of fans.

Took a late night stroll to the train station the