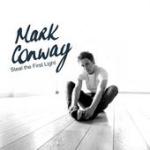 I did this for MusicReviewUnsigned when I get a direct link I will update.

Mark Conway’s debut EP ‘Steal The First Light’ has just been released. Quite a nice little package it is too!

What starts like it could be just another guy singing with a guitar turns into something quite sparkling, once the chorus starts on ‘Nothing Left To Do’, the fantastic layered harmonies take over.

Conway’s vocal style is quite similar to John Mayer, not a bad thing, the upbeat ‘What I’ve been living for’ shows it off nicely.

‘Untold’ is a track, in the modern Americana/folk vein, not unlike something from the Dawson’s Creek soundtrack. Truthfully this song is good enough to have been on that soundtrack.

Title track ‘Steal the First Light’, sees Conway back with his guitar. Vocals and Guitar let each other breathe in this track, allowing truthful lyrics to come to the fore.

The uptempo ‘Gypsy Girl’ closes the EP. You can’t really ask for more from a debut. It’s well recorded and produced and the balance of where each track is, is just perfect.

Thanks for dropping by!

Looking at things from another perspective. Londo

The soul catcher was out that night. If he works f

I've got a really busy show today on #TheLondonEar